Evolution of a House Number 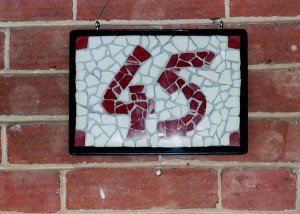 We had not planned to buy a house but in 2004 we did, and that was the seed of Nutmeg Designs, our 1-bedroom-2-studio-rowhouse.  I was just beginning to allow myself to explore mosaic, and I bought glazed ceramic tiles from the hardware store, along with tile nippers and gray grout.  It felt like assembling a 1000 piece jigsaw puzzle, with no reference photo on the box.

I immediately faced the problem of making a number legible when it’s composed of many small pieces.  Although I had a good contrast with the maroon and the pale green background tile, using gray grout made the 45 a patchwork.  But I finished it, and that brought a feeling hopefulness that I could actually make things with my hands. 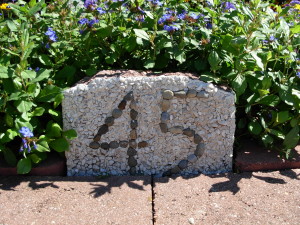 Margaret’s Second 45(2005): Pebbles and cement on a Concrete Paver

A few months later, I made another 45, this time with pebbles. I embedded each pebble in a thin layer of cement atop a paving stone. Stratoz hauled it to the front of the garden.  The crushed marble bits that I set into the background reminded me of the stucco houses in Edmonton where I grew up, which sometimes had bits of pop bottles sparkling among the white stones. 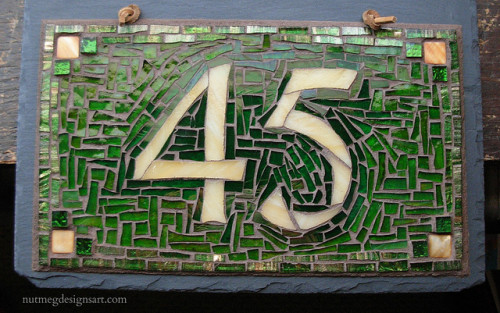 Nutmeg Designs 45 circa 2011, glass, mother of pearl, gold smalti, on slate, and the original leather strap which we swapped for screws after a big gust of wind.

In 2010, Stratoz and I made our first collaboration on Hope.  He designed and cut out the letters using his newly acquired stained glass skills, and I created the background, on a piece of slate.  A friend kept telling me we needed to make house numbers.  She saw the potential in what we were creating.  We started by making one with her number, and taking it to craft shows, and we were startled by how enthusiastic people were.

Stratoz solved the numbers for me, made them unified and legible and elegant, and in turn I was able to give the numbers a glass ground of color and flow that was beyond my first imaginings of what a background was.  Each number we make is a testament to wayfinding, to hospitality both toward guests and toward yourself.